Every morning over 2,000 students and staff arrive at the International School of Beijing (ISB) and every night they return home. This dance of people occurs by foot, by bike, by car, and for nearly half of us, by bus. ISB's extensive bus program serving students and staff includes over 60 buses with routes all around the city.

In the fall of 2017, three students (Brian L, now grade 11; Hiro W, grade 10 last year; and Terri L, who graduated last year) from ISB's Net Impact service learning club started to wonder about the impact of all these buses as they rode them from downtown and back each day. They asked whether we need so many buses. Why do the buses look empty sometimes? Are the buses the right size? Can we use electric buses like the Beijing government is increasingly doing?

This group decided it was up to them to investigate these questions and they formed the Green Buses project team (Net Impact ISB uses a project-based learning format where students form teams to investigate, prepare and take action on issues around ISB). The Green Buses project had a two-pronged approach: "Reduce the carbon footprint of our buses by redesigning the bus routes, sizes of the bus, and ultimately aim to change current fossil-fuel-burning buses to electrically charged buses." Their approach followed an experiential service learning model:

(Above is one of many pages of bus program data. The Green Buses team's response? "So much data! This is awesome!")

The students were surprised at the amount of feedback and reflection needed to address their first aim of correctly sizing the buses. As stated by Brian, "there were so many factors to consider." Factors such as allowable student travel time, Beijing traffic delays, buses serving multiple routes, and overnight bus parking, ultimately made the team's original recommendation to save 1.6 metric tons of carbon dioxide by switching in medium-sized and small buses for some large buses unworkable. Despite the setback, the students kept pushing themselves to make a net positive impact with their second aim – electrically charged buses. 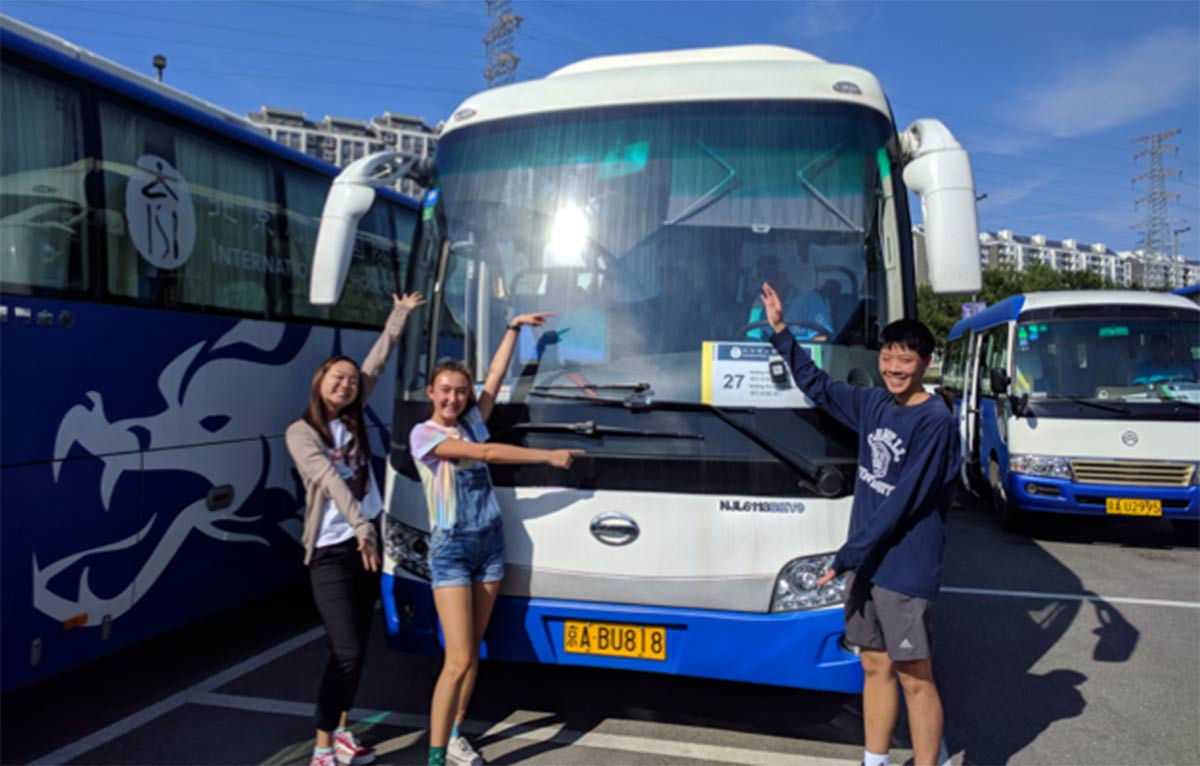 On return to campus in fall 2018, Brian observed something new sitting in the parking lot – two electrically charged ISB buses. Based on his team's recommendation, the administration had commenced a pilot program to test the reliability, operation, and charging logistics of electric buses. Brian remembered, "I was definitely proud of myself and my team members since we faced a lot of struggles. I was also proud of my school because we were participating in the movement of reducing air pollution."

The team continues to work on this project through promotion and surveying student impressions of the new buses. The findings of the recently completed student survey were unanimous; students want to see more electric buses on campus.

Noise, or the lack thereof, was the most noticeable characteristic of the electric buses to Mr. Alcock, as his first comment was on how quietly they roll through the parking lot.

ISB is now in the process of evaluating an expansion of the pilot program to cover a much larger portion of the bus fleet. The school has identified many benefits to students and the community with this potential change, including:

Electrification is one of the strategies under ISB's Sustainability Program to create a net positive impact on people and the planet.

ISB’s new Strategic Plan formally identifies strong relationships as one of the school’s priorities. With a host of events on offer for parents this month, here’s a look at how ISB engages parents in its welcoming community.